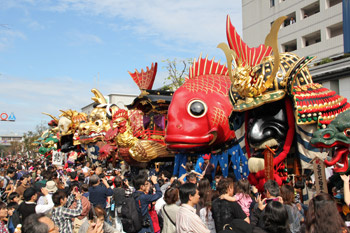 The Karatsu Kunchi Festival is an annual autumn festival of the Karatsu Shrine. It is held for three days from November 2 to 4 every year, and fourteen hikiyama or giant floats race through the streets bravely while shouting "Ennya, Ennya". The festival's hikiyama race dates back to 1819 when a woodcraftsman Kahei Ishizaki from Katana-cho built Akajishi, or red lion, with his comrades as an offering to the shrine after he was inspired by the beauty of the Gion Yamagasa he saw in Kyoto on his way back from a pilgrimage to Ise. Since then a total of fourteen huge floats was built by 1876, including Aojishi, or blue lion, Urashima Taro, or Urashima the Fisherman, Tai, or sea bream fish and Shachi, or killer whale. Unfortunately, the Kurojishi, or black lion, of Konya-cho disappeared in the middle of the Meiji Period and there are fourteen huge floats stored today, which have been designated as Saga Prefectural Important Tangible Folk Cultural Properties, as well as the event itself being designated as an Important Intangible Folk Cultural Property of Japan. November 2 is called Yoiyama and is the day when huge floats lit up with lanterns parade through the town with the Akajishi of Katana-cho in the lead. The biggest highlight of the three-day festival is the Otabisho Shinkou, held on November 3rd. On that day, the huge floats leave the Karatsu Shrine at 9:30 a.m. heading to the Otabisho or a temporary shrine situated on the beach in the west of the town, while running down the main street shouting bravely "Enya! Enya!". The huge floats swing widely from side to side when they take sharp corners in the streets. When the clock hits noon, it is time for the popular Hikikomi event, in which the huge floats are pulled to the Otabisho in a sandy area, while pulling the wheels from the sand to place the floats to a prescribed position. The huge floats speeding down the streets and pulling to the sand is a sight to see. It is the climax of this brave festival which gives a traditional atmosphere reminiscent of a scroll painting with brilliant colors. On the final day of the 4th, the huge floats parade through the town and are brought back to the Hikiyama exhibition hall located next to the Karatsu Shrine with excitement still running high.

● Access: To Karatsu Shrine
From train station: 10-minute walk from Karatsu Station on the JR Karatsu Line and Chikuhi Line
Car: 40-minute drive from Nagasaki Expressway Taku IC
*During the Festival, please be sure to take public transportation to avoid heavy traffic jam

● Parking Lot: Temporary parking lots available at different locations in the city (some parking lots may be subject to fees)