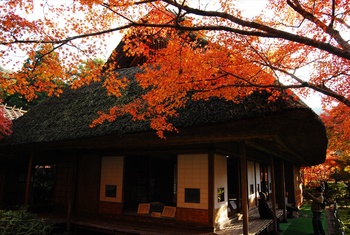 Kunenan is a national scenic spot renown for its beautiful autumn leaves and was originally the holiday home of a Saga businessman named Taro Itami. The name "Kunenan" or literally "9 Year House" derives from the fact that Kunenan was built over a 9 year period from 1900 under the guidance of Hotori, a priest of Zen Buddhism. Azaleas, maple trees and more are planted in the gardens around the Sukiya-style residence, with the Chikushi Plains in the background. The naturally-growing moss, trees and carpet of juniper haircap moss complement the atmosphere beautifully. Kunenan used to only open to the general public for only 9 days every year in the middle of November, the best season for appreciating autumn leaves, but now it also opens for the season of fresh greenery.