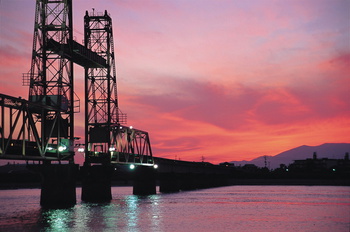 The Chikugo River Lift Bridge, the symbol of Morodomi town in Saga city, spans the biggest river in Kyushu, Chikugo River, and is one of only a handful of moveable life railway bridges in the world. It is 507 meters long and the section between the two 30-meter high towers can rise to a height of 23 meters just like an elevator, allowing large vessels to pass underneath. Before the bridge was built, the locals were trying to find a solution to build a railway bridge to allow trains to cross this wide river, with a drastic difference in water level between high and low tide, while not hindering the passage of large vessels, which frequently travelled on Chikugo River. This is when they came up with the bold and innovative idea of a lift bridge. However, the Ariake Sea, with its tidal range of up to 6 meters, meant that the water level of Chikugo River was constantly changing, not to mention the 16-meter thick layer of clay at the bottom of the river was slowing work down, making the work method and construction extremely difficult. Overcoming these great difficulties, a railway bridge for the former national railway, Saga line, was completed on May 25th, 1935 as the first lift bridge in the East, amidst much fan-fare. Since then, the bridge has served an important part in supporting people's lives through enabling both water and land transportation. However, on March 27th, 1987, operation of the Saga railway line ceased at the same time that the moving part of the bridge reached its highest point, and its role as a rail bridge, which it had served faithfully for over 50 years, came to a quiet end. On April 29, 1996, the bridge was reopened as a walking course for pedestrians. The name of that walking course is "Tower Bridge Walking". Eight times a day, the moving part lowers and connects Morodomi town with Okawa city, Fukuoka prefecture, located on the opposite bank. An amicable walking course by day, and a beautiful, lit-up spectacle reflected on the water's surface by night, the Chikugo River Lift Bridge provides delightful romantic atmosphere for couples. The silhouette of the bridge in the sunset is another sight not to be missed. In the huge, mid-summer event carried out beside the bridge, "A Summer Night's Fairytale", huge rings of around 3000 shells of fireworks light up the night sky and invite onlookers into a magical world. The bridge is also open to pedestrians when the moving part is raised, and people can go as far as the middle section. On May 30th, 2003, the bridge was designated as an Important Cultural Property of Japan.

● Closed: Mondays (or the following day if a Monday falls on a public holiday) and December 29 - January 3