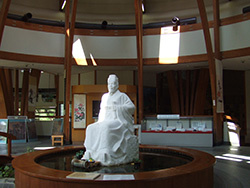 2200 years ago, Xu Fu travelled to Japan in search of the elixir of life for Qin Shi Huang, First Emperor of the Qin dynasty, and there are many legends which arose in the wake of his journey. The setting of many of these legends is Saga city. Let's introduce the legends of Xu Fu while walking in his footsteps.

● Origin of the place name “Bubai” (Morodomi town, Saga city)
When Xu Fu’s party reached the Ariake Sea, they decided to float a cup (Bu) in the water and go ashore where it touched land. As such the place where the cup landed is referred to as “Bubai”, which literally means “floating cup”.

● The legend of the single-leafed reed (Morodomi town, Saga city)
The party made their way to land by pushing through the reeds and they only pushed away one side of the reeds, therefore all of the reeds in this area have only had one leaf since. Even today, only single-leafed reeds grow along the bank of Teraitsu as though to support this legend.

● Nikita Shrine’s sacred Juniper tree (Morodomi town, Saga city)
Xu Fu planted a juniper tree as evidence he had landed in Japan. This juniper tree is said to have grown strong and big, straight upwards towards the sky. Juniper trees normally grow in warm climates and there are practically no other cases of these trees in Japan. Not to mention, trees estimated to be around 2200 years old such as this one are even rarer, making this tree mysteriously fall in with the Xu Fu legend. This juniper tree still stands today as the sacred tree of Nikita Shrine.

● Thousand cloths to the north (Saga city)
Xu Fu started out on a journey to Mount Kinryu, which resembled Mount Penglai. However, the path was rugged and he had difficulty walking. As a solution, he laid down cloths to make it easier to walk. When he reached Chifu of Kinryu town, Saga city, he had used precisely 1000 clothes and that is how the place got its name of Chifu, or literally, “A Thousand Cloths”.

● The love of Xu Fu and Otatsu (Saga city)
Xu Fu fell in love with the woman who was serving as his guide, a daughter of Genzo named Otatsu. But Xu Fu’s message of “I will return in 5 years” when he left Mt. Kinryu, was mistakenly conveyed as “I will return in 50 years” and Otatsu is said to have drowned herself out of sadness. The Otatsu Kannon statue at Kinryu Shrine is a tribute to this tragic love story.

● The elixir “Furofuki” (Saga city)
Xu Fu reached the peak of Mt. Kinryu, where he met a hermit and obtained the elixir of immortal life. The name of this elixir is Furofuki, and it still grows at Mt. Kinryu today. Incidentally, the name “Furofuki” is said to come from the word” Furofushi” which means “no aging, no dying” in Japanese.