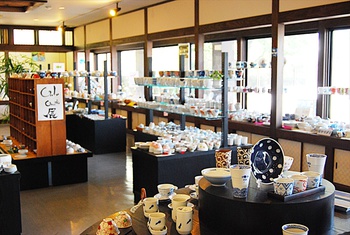 Although the year when Yoshida-yaki was established is not clear, unraveling the history of ceramics and porcelain in Ureshino, it seems that Takanobu Ryuzoji discovered a stone which glowed white in the bottom of Narutani River, upstream of Haguchi River which runs through Yoshida village, when he lead a campaign on Harunobu Arima of Omura in 1577. This is said to mark the beginning of Japan's porcelain mining.
Nabeshima Naozumi was Saga Domain's lord from 1624 to 1644, and upon his retirement, he worked to encourage the ceramics and porcelain businesses of Mt. Yoshida. Between 1801 and 1804, Iemon Fukushima increased the number of kilns beyond the limit, expanding the business and helping Yoshida-yaki to thrive.
However, the business began to gradually decline after the Meiji Restoration so Seiseisha was established in 1880 and improvements were made. After this, efforts were exerted to manufacture daily-use crockery for exports to China and Korea, however this became more and more tailored towards Japanese domestic use, to become what it is today.
Taking pride in history and tradition, the kilns of Hizen Yoshida-yaki still strive to improve their technologies today.