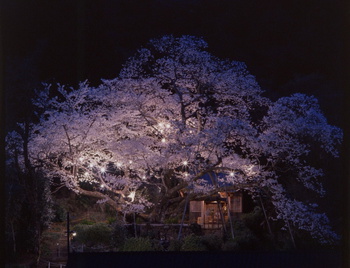 Meisei Sakura grows within the grounds of Kannon Temple in Urakawauchi of Higashiyamashiro town, Imari city. This giant tree is surrounded in a stone wall and measures 5 meters around the roots, 13 meters in height, with a branch span of approximately 20 meters from east to west, and 15 meters from north to south. 2 meters from the base of the tree, the trunk splits into 4 main branches and, while there are hollows in parts, from late March until early April, this tree produces new leaves and light pink cherry blossoms. A survey on giant trees and woods by the Ministry of Environment determined that it had the greatest trunk girth in Japan in the cherry blossom tree category (trunk girth is 11.4 m).
Meisei Sakura is famous in Saga prefecture as being one of the oldest sakura trees and it is of a type which bears single blossoms. It was previously thought to be part of the wild sakura species, however a recent survey shows strong evidence it actually belongs to the double weeping rosebud cherry family. The tree is believed to have been brought back from a place called Mibu in Kyoto by the homesick Awajinokami Urauchi, a subject of the second Matsura ruler, Genshi, roughly 900 years ago when he developed the Wakino district of Higashiyamashiro town. The tree gets its name, Meisei, (which means "Venus" in English) because it is said to look like Venus when its petals are reflected in the flames of the fire lit under the tree to view it at night during the blooming season.

● Designated as: Natural monument of Saga Prefecture
・Blooming around a week earlier than Yoshino cherry (common cherry blossom)
・Designated as a natural monument by the City on October 1, 1979
● Date of designation: March 31, 1993
● Location: Uragawachi, Yamashiro-cho, Imari-shi