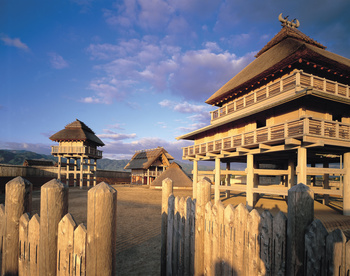 The Yoshinogari Ruins is Japan's largest dry moat-surrounded settlement of the Yayoi era, boasting a 2.5 km long dry moat, stretching over Kanzaki and Yoshinogari.
From the Yoshinogari Ruins, many remains have been discovered, including a number of dwelling sites, remains of raised storehouses, over three thousand Kamekambo tombs, and Funkyubo, or the tumulus known as the graves of the Imperial Family, in the middle of the Yayoi Era. The tumulus had many bronze swords requiring advanced technology and glass cylindrical beads, indicating the interaction with the Asian continent.
When the Yoshinogari Ruins first opened to the public in 1989, it became a major topic of the year as the tumulus was reminiscent of the Yamatai Koku Kingdom described in the Gishi Wajin Den, an ancient Chinese account of Japan. The Yoshinogari Ruins are considered precious as they offer traces of history when a village that adopted the culture of rice making through the Korean Peninsula made a development to become the nation's nucleated settlement. There are watch towers and pit dwellings in a restored condition, creating the ancient atmosphere of the Yayoi Era, while the exhibition room displays a collection of unearthed articles.
The Yoshinogari Historical Park, which opened in April 2001, is divided into four zones, namely, the Entrance Zone, the Ancient Forest Zone (currently under maintenance), the Moat Encircled Zone and the Ancient Field Zone, offering a place where visitors can gain first-hand experience of the Yayoi Era to their hearts content. The Entrance Zone offers a variety of visitor information related to the Yoshinogari Historical Park, and the Moat Encircled Zone allows visitors to view Shusaiden and the watch towers, which are unique structures of the Yayoi era, as well as the lifestyle and culture of the Yayoi-jin people. The Ancient Forest Zone is an area featuring large wooden playground equipment that resembles a watch tower on a vast grassy field and is a place where visitors can enjoy physical activities.
In April 2005, the renovation of Minami Naibu; a dwelling of the King, was completed and opened after a major face lift. Such as the watch towers that played a symbolic role in the Yoshinogari Village, the King's house and the hall of assembly, a collection of structures that are reminiscent of the lifestyle back then have been restored back to life in a vivid manner.

■ Monomi Yagura Watch Tower
The remains are presumed to be of a watch tower described in the Gishi wajin den and were found inside of the inner moat. Surrounded by a number of small towns, the Yoshinogari Ruins are thought to be a nucleated settlement that controlled these small towns, and the watch towers are believed to function as a tower to monitor intruders from the outside. The restored watch towers stand 6.5 meters in floor height and 12 meters in height, which are high enough to overlook the Saga Plains in the distance. Although visitors are not usually allowed to go up the tower, the tower opens to the public in spring and summer during a special event.

■ The remains of raised storehouses
The raised storehouses are built to improve airflow by raising the floor. What is unique about the Yoshinogari Ruins is the huge size. Compared to the regular storehouses in the Yayoi era, the size and quantity are both believed to be on a mass scale. It surely tells us the prosperity of Yoshinogari back then. There are two storehouses restored currently. Visitors can take plenty of time getting a feel of its size.

■ The Exhibition Room
Many of the major unearthed articles can be observed here, including the Kame Kan coffins, bronze swords, unglazed earthenware and arrowheads, all of which are either genuine articles or models. It also houses a replica of light blue glass cylindrical beads that have been discovered from the tumulus, which can also be referred to as a proof of interexchange with the continent. Although they are not real, the beauty of the glass cylindrical beads draws your attention.

● Closed: December 31, and the 3rd Monday and the following day of January