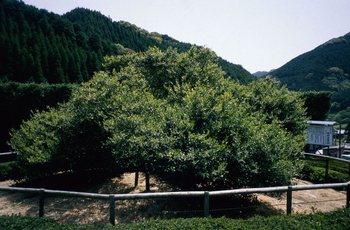 Daichanoki is one of the symbols of Ureshino city, which is renowned for its hot springs and tea. This giant tea tree stands 4.6 meters high and has a branch span of around 80 meters?. Tea production in Ureshino is said to have been started by the Chinese of the Ming dynasty who travelled to the region around 550 years ago. In the Sarayadani valley of Mount Fudo, where Chinese people are said to have settled, there are tea fields stretching as far as the eye can see. It is believed that Daichanoki is one of the tea trees which Jinbei Yoshimura, referred to as the "ancestor of Ureshino tea", encouraged the cultivation of here in the 1600s. This makes the tree 340 years old. Ureshino was visited by many people during the Edo Period as it served as a post station along the Nagasaki Kaido and a place of healing through hot spring bathing. No doubt a cup of Ureshino tea soothed many a weary traveler. Recently the Ureshino tea industry has revived "kamairicha", the old techniques of making tea, and is attempting new things such as making matcha and black tea.

From train station: Get off a train at Takeo-Onsen Station on the JR Sasebo Line. Then, get on JR Bus bound for Ureshino Onsen, and get off at the final stop “Bus Center”. Next, get on a bus bound for Fudozan at the Bus Center, and get off at “Daichaju Iriguchi” stop
Car: 20-minute drive from Nagasaki Expressway Ureshino IC