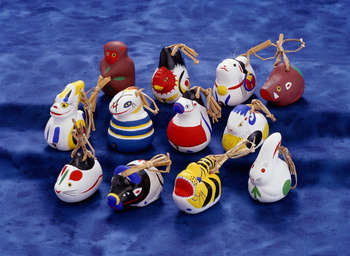 Nogomi Ningyo ornaments are sold as a shrine souvenir at one of the three great Inari shrines in Japan, Yutoku Inari Shrine. This clay ornament is a local toy made by Teruji Suzuta based on a desire to brighten the world in the wake of the war. Nogomi Ningyo are still made today in Nogomi, Kashima city. They became known as good luck charms and charms to dispel evil spirits and are highly popular amongst tourists now as a signatory folk craft of Kashima. Each and every Nogomi Ningyo is made with love into the extremely cute, round simplified and colorful shape they are known for. The tinkle of the tiny bell and warmth typical of a clay object have a soothing effect on the soul. Moreover, the rabbit and sheep figures part of the "twelve branches of the zodiac" series where adopted as the designs for New Year's stamps in 1963 and 1991 respectively, and as a result became known throughout Japan.