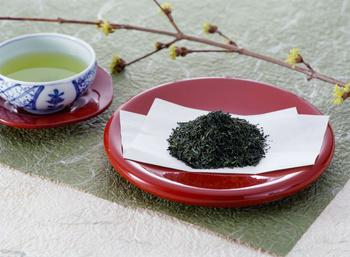 Ureshino is famous for its hot springs and its tea. Terraces of tea fields sprawling out one after the next is a scene typical of Ureshino. Proper cultivation of Ureshino Tea was begun between 1648 and 1651 by tea grower, Jinbei Yoshimura, who is even sung about in the local folk songs. Tea seeds were gathered from Mount Sefuri and planted in the mountainous region of Ureshino Onsen, ideal as a tea growing area. This ultimately resulted in the flourishing tea industry of present day. Daichanoki, which is designated as a natural monument of Japan, is said to be from this time. The two teas of "Pan-Fried Tama Green Tea", with its rich flavor and refreshing notes, and "Steamed Green Tea" with its full-body aroma and rounded flavor are what are referred to as "Ureshino Tea".
Ureshino also offers unique experiences which utilize locally-produced Ureshino Tea. One of these is "Cha-shabu". This is a shabu-shabu dish consisting of carefully-selected pork cooked in the tea extract used to make Ureshino Tea. Tea contains a high amount of vitamin C, giving it the ability to eliminate odors and break down fat, leaving you with a refreshed feeling after eating. Another experience using Ureshino Tea is "Chaburo". This is an open-air bath containing Ureshino Tea leaves said to be good for the skin due to the catechin, which has the ability to kill bacteria, and the tea containing vitamin C, making it a popular activity for the ladies.
Saga prefecture has a deep relationship with tea and the region said to be the cradle of Japanese tea cultivation lies within Saga prefecture. In 1191, the monk Eisai brought tea leaves back with him from China and planted them at the base of Mount Sefuri (present day Yoshinogaricho, Kanzakigun, Saga) and this is said to be the origin of Japanese tea.