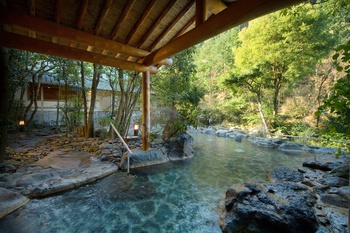 Ureshino Onsen has a long history and is mentioned in "Hizen Fudoki" in 712 with the entry, "There is a hot spring in the eastern region with medicinal benefits for man's ailments". The origins of the name Ureshino are indeed unique. It is believed that Empress Jingu, passing through the area on her way home from war, discovered a hot spring in the middle of a river. The hot water is said to have soothed the injuries of her wounded soldiers and she is claimed to have said "Ana, ureshino" (meaning "Oh, I am so happy"), which was to become the area's name.
Ureshino prospered in the Edo Period as one of the post stations along the Nagasaki Kaido and was apparently also visited by Philipp Franz von Siebold in 1826. Many large traditional inns line Ureshino's streets, and it is a hot spring town where visitors will experience both culture and history.
The hot spring water ranges between 85 and 90 degrees C in temperature, contains natrium hydrogen carbonate and chloride, and has a reputation for being beneficial towards rheumatism, nerve pain and gastrointestinal diseases. The water is so smooth to the touch that people even say, "Once you experience Ureshino water, you will never want to leave". Tofu cooked in the hot spring water is a famous Ureshino Onsen delight and a recommended snack to follow a luxurious bath.