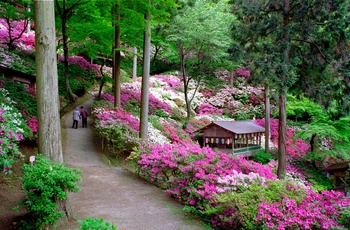 Daikouzenji Temple is a temple of the Tendai Sect established by Gyoki in 717 and is so well-known for its azaleas that it is also referred to as "Tsutsuji-ji" or literally, "The Azalea Temple". The azalea field covering an area of 75,000 square meters at the back of the main temple is completely buried in a blanket of around 50,000 azaleas from mid-April to early May. Daikouzenji Temple is also famous as a spot to appreciate the beautiful autumn leaves and it receives many visitors all year round. Moreover, Daikouzenji Temple houses several culturally significant items. These include the Wooden Komokuten Statue, which is designated as an Important Cultural Property of Japan, and the Wooden Tamonten Statue, as well as the Eleven Faced Avalokitesvara and other statues of Buddhist gods carved out of wood, said to have been created by Gyoki himself. These items are only allowed to be viewed by the public once every 12 years. Another representative feature is the stone 5-tier tour dating back to the middle ages situated in the temple grounds. The azalea miso paste sold in the neighboring area is popular as a souvenir.

● Season:
Best time of azalea (mid April to beginning May and mid November to late November)