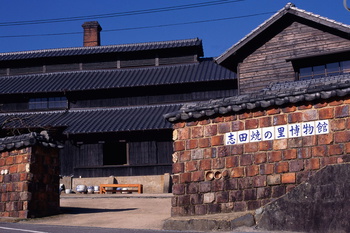 Following Arita, the town where porcelain was fired successfully in Japan for the first time, Shiota town of Ureshino city began making porcelain in the 1700s, in the Nishiyama and Higashiyama kilns, using Amakusa porcelain stone. In contrast to the premium porcelain produced in Arita, Shiota developed as a pottery town which produced Shida-yaki pieces in large volumes for the general populous. Amongst a variety of products, the big plates depicting Shan shui landscapes or animals with long, easy brush strokes, are certainly the finest that Shida-yaki has to offer. Shida-yaki reached the height of its popularity after entering the 19th century. Pottery was produced to suit the needs of the various ages, namely the end of the Edo Period, Meiji and Taisho. The Shidayaki-no-Sato Museum was once an actual factory which produced Shida-yaki products until it was closed in 1984 and was converted into the museum it is today. It is a valuable facility where one can be introduced to all of the processes involved in porcelain manufacturing during the Taisho and early Showa Periods, from creating potter's clay to shaping, decorating and firing.

● Access:
From train station: Get on Yutoku Bus bound for Kashima Yutoku at Takeo-Onsen Station on the JR Sasebo Line, get off at “Nishiyama” stop, and walk for 2 minutes
Car: 15-minute drive from Nagasaki Expressway Takeo-Kitagata IC