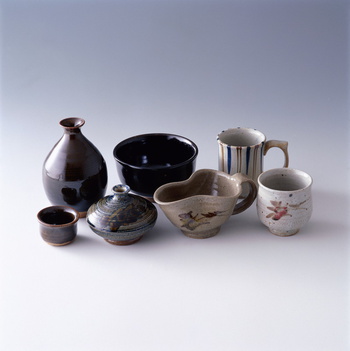 Takeo Kokaratsu-yaki is said to have been the foundation for present day Karatsu-yaki pottery. This style of pottery began when Ienobu Goto, the 20th leader of Takeo Domain, returned from being dispatched to Korea s part of Hideyoshi Toyotomi troops in the Bunroku and Keicho invasions. Ienobu brought Souden, the famous potter, and other potters and together they began Kokaratsu-yaki. A variety of techniques and methods such as forming and patterning have been passed down to today. Takeo Kokaratsu-yaki wares are characterized by their simple, subtle tones and warmth. All daily items of common people in Hizen were made from this form of pottery. Today there are around a dozen kilns still operating.