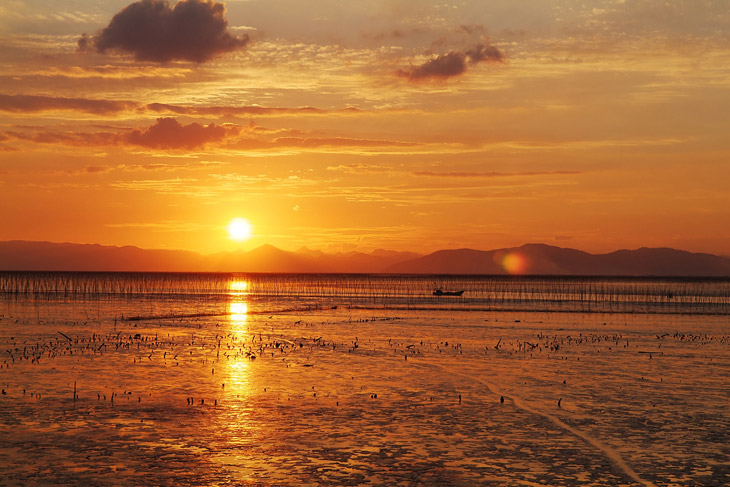 Saga is rich in nature. A kind of nature just not found in urban areas, a kind of nature which can cleanse you mentally and physically. With seas to the north and south, gentle mountains for hiking and vast fertile lands bringing rich agricultural products. Saga offer a vast range of things to enjoy such as; deep cultural history, nature, hot springs, festivals, leisure, shopping and gourmet food to name a few. Saga’s culinary offerings might be its most well-known. From sushi and Wagyu beef to healthy local dishes made from fine locally produced ingredients, you will find many delicious delicacies around Saga.

Saga is in the northern region of Kyushu located in the southwest of the Japanese islands. Saga is bordered on the north side by the Sea of Genkai, a beautiful coastline area known as The Genkai Qausi-National Park. To the south you will find fertile lands and the Sea of Ariake, a vast tideland with a tidal variation of as much as 6 meters. Saga is a prefecture with relaxing country views, a population of about 800,000 and thriving with agricultural and fishery businesses. Saga also offers globally famous potteries, top quality food, relaxing hot springs, festivals, historical and traditional culture along with many other attractive experiences.

People started living in Saga from the B.C. era as the region was rich with nature and food. They exchanged actively with China and Korea and in 17th century, pottery techniques were brought from Korea and developed uniquely in Saga. Today, highly artistic pottery is being produced. Saga took the initiative and was a front-runner in the modernization of Japan by adopting western science technology such as iron-making and the use of steam engines at an earlier stage. From the romantic ancient monuments to the foundation of modern industries, Saga has generated various culture and crafts through its long history. One of the representative items is Arita ware. Products were exported through the Dutch East India Company and were hugely popular at the Paris Expo in 1867. At the Paris Expo, Arita ware received the 'gold prize' and played a huge part in the boom of Japanism.

The climate in Saga is relatively mild with an average temperature of around 16℃ (61℉). During the rainy season (June to July), the prefecture experiences a lot of rain like many other parts of Japan. In summer (July to Sep.), it can be hot with temperatures around 30℃ (86℉), while temperatures in the winter (Dec. to Mar.) will fall to below 10℃ (50℉) so you will need warm clothes. Compared to other regions of Japan, Saga experiences fewer earthquakes and volcanic eruptions.

How to get to Saga

Other Air Routes (via Fukuoka Airport)
Fukuoka airport has many flights from domestic and international cities including major Asian airports and Amsterdam.

From the airport to Saga, there is a direct coach service and you may also take a train via Hakata station.